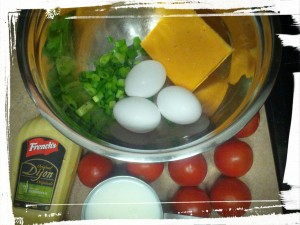 Whole foods of the world, unite!

No Pie Odyssey would be complete without a handed-down pie crust recipe, and this is one that comes from my family. Which I (of course) then modified, based on my pie-making experience and the ingredients I had on hand. I was going to try a purely shortening crust, but only had half a cup of the shortening, so I added in some butter. And I’m trying it with vinegar because before there was the vodka crust, vinegar was the crust innovation de jour.

Let’s see how it turns out!

Mix flour, salt, shortening and 2 tbsp. water and 2 tbsp. vinegar together until crumbly. Add in butter and mix until still crumbly and butter is distributed. Add in remaining vinegar to hold it all together. Form into flattened ball, wrap in plastic wrap, and let it rest in the fridge for half an hour or more.

Roll it out on a floured surface, using a floured rolling pin. Roll the dough over the rolling pin to lift it into the pie plate. Cut off any overhanging edges and use them to fill in any empty spaces.

Crimp the pie crust by squishing the edge between one finger on one hand and two fingers on the other hand. Or use a fork to make a decorative edge. 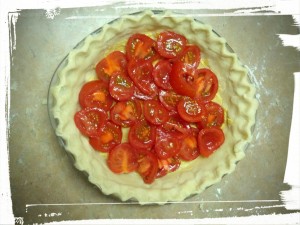 Layered up real nice. Or just put it any which way.

Now, what to put inside the crust? Well, it’s dinner time and I’m hungry, so let’s make a quiche!

A few years ago now, I went to the south of France and explored a medieval village there, St. Paul de Vence. There’s a little café in the village that makes a delicious tarte a la tomate that was the inspiration for this quiche. The owner of the café gave me a tip when she saw how much I enjoyed my lunch: a light spread of mustard on the pie crust before adding in the rest of the filling gives it a piquancy that makes the dish.

I don’t know whether it was that I had just recovered from an stomach upset earlier in my trip and was extra hungry, or whether it was the locally grown tomatoes, but it was soooo good! I’ve always wanted to replicate it, and here I’ve taken that flavour and added it to a quiche. 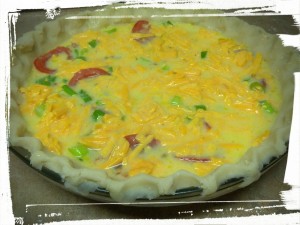 Ready to be popped into the oven!

Spread mustard on the bottom of the pie crust. Add sliced tomatoes to cover mustard. Mix eggs, milk, cheese, chopped green onions, salt, and pepper together and pour over tomatoes. Bake in 400 degree oven until top is starting to brown and the quiche is set (it’s at least as firm as jello when you touch the centre), about half an hour. 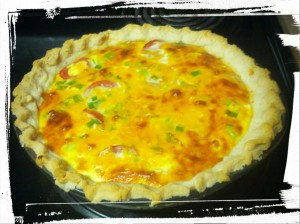 Fresh from the oven, all golden and yum!

Ok, so this crust is very crumbly, even though it holds together well enough to serve. I guess the vinegar really makes a difference! If you like crumbly crust, this is definitely the recipe for you! I have yet to figure out how to make a crust flaky and not crumbly, but maybe there’s no difference. Or is there? Let me know in the comments!

Next Post: The Pie Odyssey Comes to an End, with the Mother of all Apple Pies. 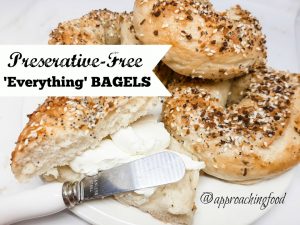 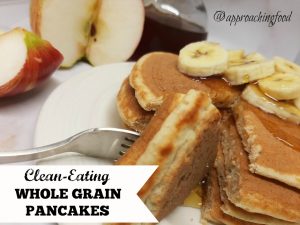 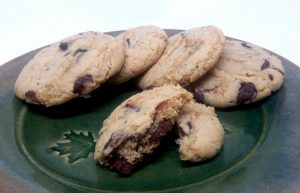 Previous Post: « Memories of Meals Past: Hungarian Sour Cream Rolls with Flax Seed
Next Post: Salads I Have Known and Loved: Topped with Candied Pecans »