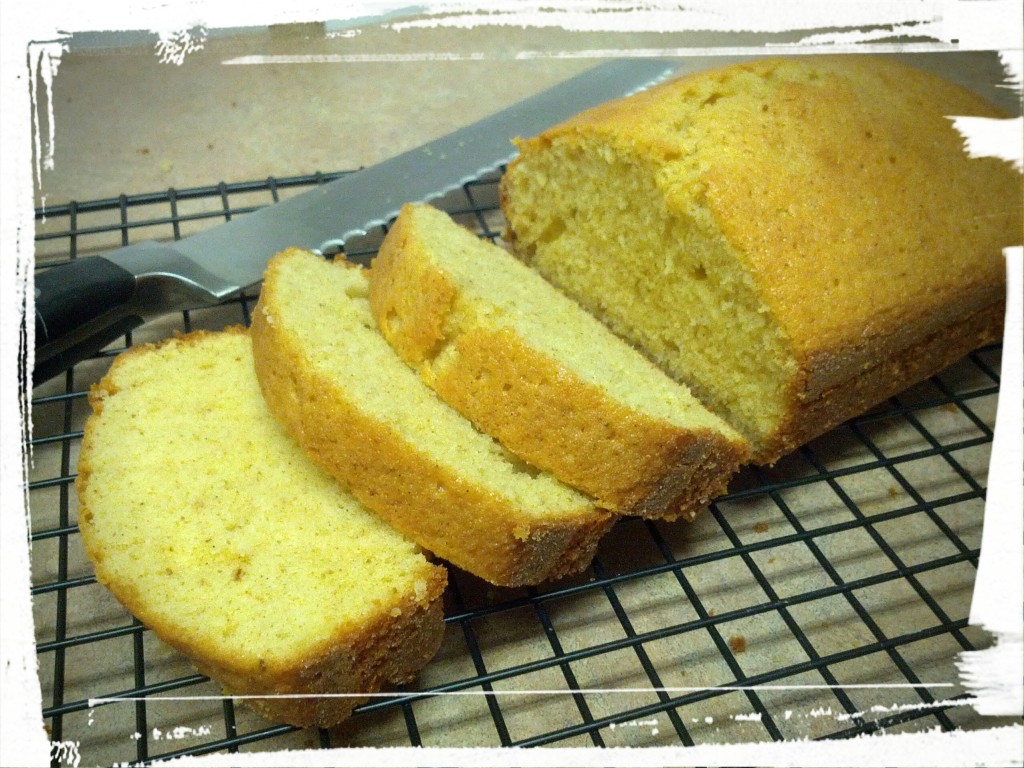 If you follow my blog, you know that I’m part of a bake-a-long group, called Tuesdays with Dorie, and that we’re baking our way through Dorie Greenspan’s latest cookbook, entitled Baking Chez Moi. We bake a new dish twice a month, and this week’s recipe is Brown Butter and Vanilla Weekend Loaf.

In France, apparently, at least in chic Parisian circles, one makes a loaf cake each week for consumption during the weekend. This particular loaf uses beurre noisette (brown butter, but doesn’t the French version sound fancier?), fresh vanilla bean seeds, as well as rum and cream. Are you drooling yet? Because I am, and I’m just typing this out. *interruption to breathe deeply the buttery, vanilla aroma of the cooling loaf*

Of course, because I’m not one to do the whole mise en place (See what I did there? Working in some French words? I guess all those years of French language class in elementary and high school paid off. Vive la…Canada? And the mandatory language lessons! We now interrupt this parenthesis to go back to our primary sentence in 3…2…1), it was inevitable that I would run out of something. I thought it would be the cream, but the DH managed to pick some up for me on the way home. Crisis averted! Or so I thought.

Because I ran out of sugar. And then flour. And then I nearly chucked the whole recipe in, but by that time I had already browned the butter and…well, the blog post link is due tomorrow for our baking group, so I felt pressured to soldier on. What’s the worst that can happen, right? Besides wasting a not so cheap vanilla bean pod? ($3, by the way. This is why I use vanilla extract.)

So I had browned the butter, scraped the vanilla bean and went to mix it with the sugar when I realize that, um, I’m out of sugar. I had only 1 cup, and the recipe called for 1 1/4. Huh.

I actually thought about knocking on a neighbour’s door to ask to borrow a cup of sugar. Except that I live in a condo and don’t have that sort of relationship with my neighbours. Also, the grocery store is down the street (two, technically). But did I want to go out into the bitter, bitter Canadian cold to buy some more sugar and flour? No, I did not.

Instead I channelled my inner kitchen diva and looked around my kitchen, and lo and behold, I had brown sugar! They don’t call me the Queen of Substitutions for nothing! So I mixed that in. 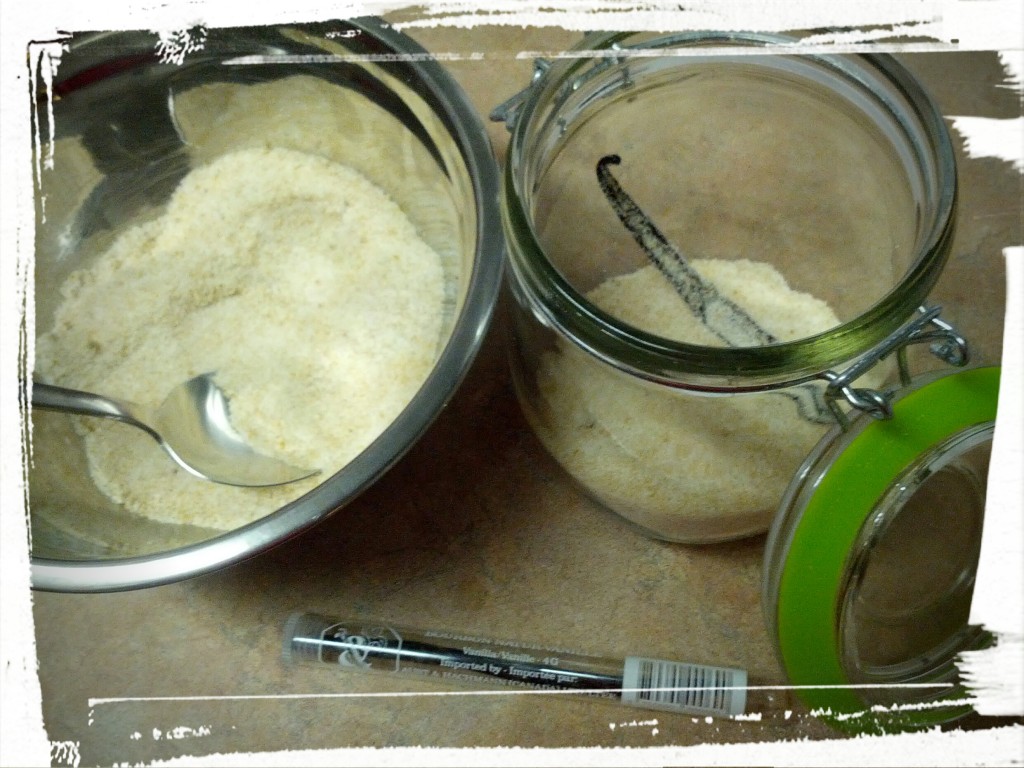 Waste not, want not, also applies to vanilla. In this case, beans into sugar!

And then I went to mix the dry ingredients and realized I only had 1 c. of flour, and I needed 1 3/4 c. I looked around my kitchen, and nope, no flour and nothing to substitute.  So I cut the recipe in half. I took half the sugar, and popped it into a glass canister and added in the scraped vanilla pod to flavour it, and set it aside. And then I packed up half the browned butter into little containers and put that in the fridge for future uses. (Maybe some sweet potato gnocchi?)

And then I had no more flour to prep the loaf pan with, so I rummaged through my cupboards and found some old rice flour from two years ago, and used that. (By the way, does rice flour go bad? Does anyone know?)

And I finished mixing up the batter, and popped the loaf in the oven. And promptly forgot to set the timer. 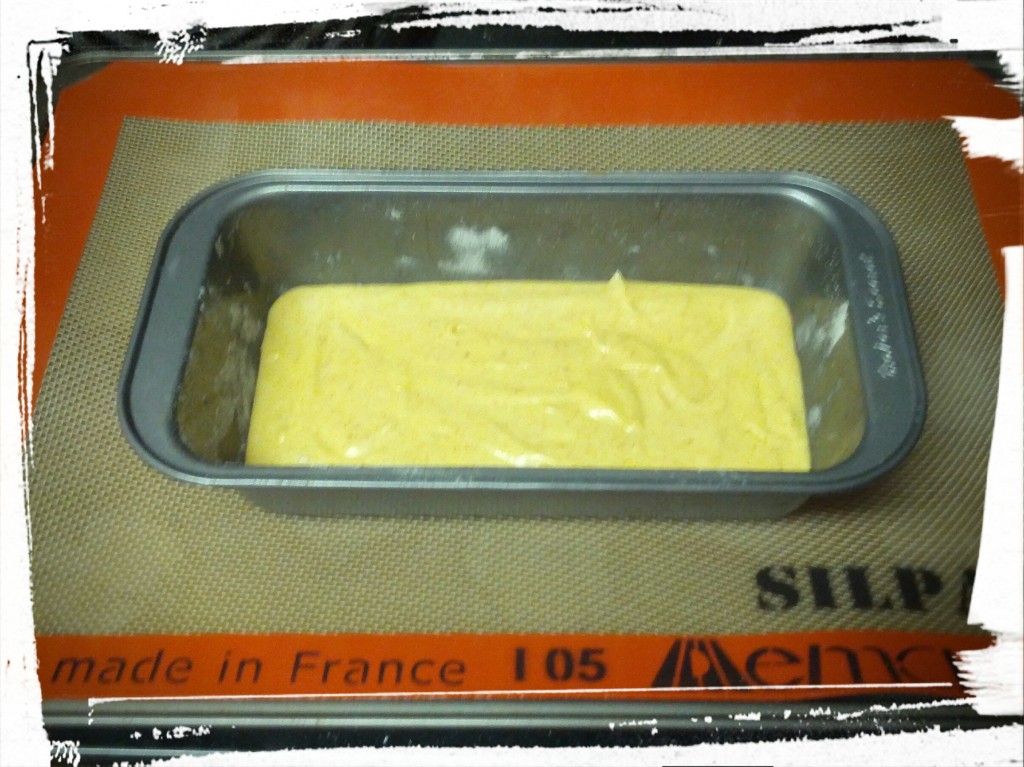 I had to include this photo. I mean, check out the wording on the silpat sheet! Apropos, oui?

At any rate, the loaf baked, and I licked the batter bowl. (The DH *may* have helped.) And oh my gosh, this batter is delicious! The fresh vanilla, the rum, the brown butter…it all melds to create this super yummy flavour! I wish I could capture that flavour in an ice cream. It’d be a hit!

When I took the loaf out of the oven (the DH was heading to bed at this point, but hung around long enough to snag a slice. Or two. And a half.) and let it cool, the loaf stuck in the pan a bit. So, note to self and all blog-readers, rice flour is not a good substitute for cake flour when prepping a loaf tin. Just so you know. I ended up cutting out an end and then using a spatula to lift out the rest of the loaf.

And then I ate a slice and a half myself! Is delicious. Not as delicious as the batter, though. Seriously, that batter…next time, I’ll just eat the batter. I wonder if I could take the brown butter and rum and vanilla flavours and use them as a base for a custard, and then turn the custard in to ice cream. And then serve that ice cream with super thin slices of this bread, toasted in the oven, biscotti-style. I think that would be the best of both worlds!

Oh, and I should note, that this loaf is supposed to be better the next day. I told the DH this as we munched away on our warm, fragrant slices of the loaf. We both sort of laughed. And took another bite. 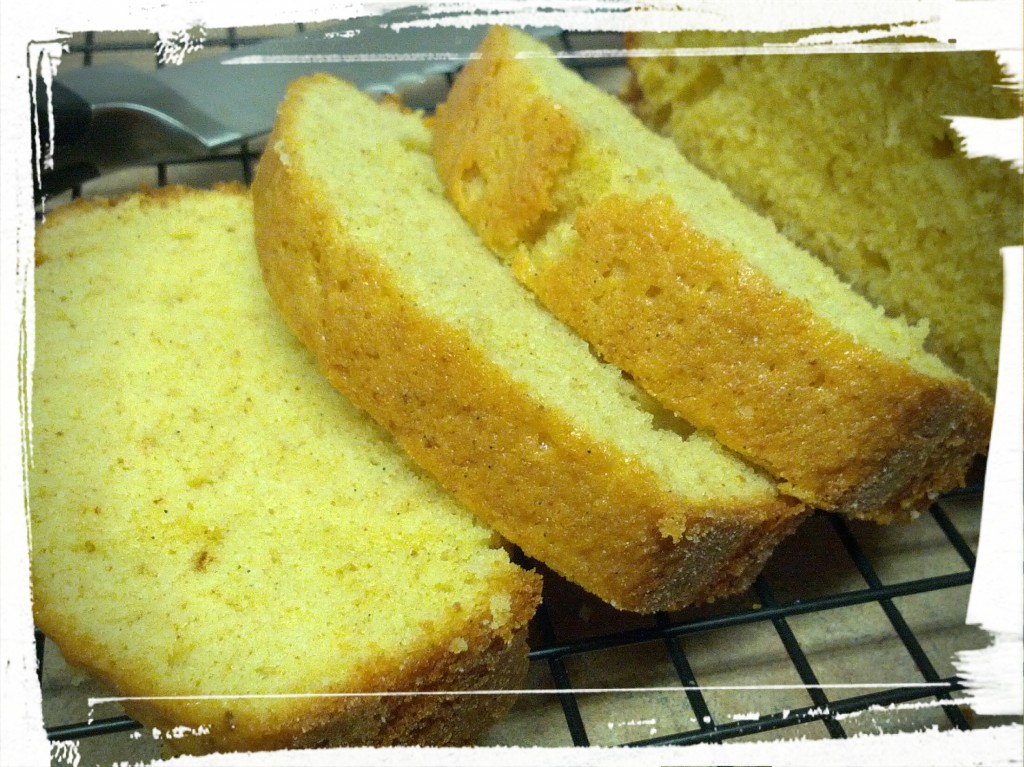 Can you see the flecks of vanilla bean seeds? I feel so gourmet!

Next Post: Maybe lentil salad sprinkles. There’s this food blog contest about lentils going on right now (I learnt about it from the Food Blogger’s of Canada’s newsletter) and I might try to submit a recipe. So that means lots of healthy pulses for the DH and I! And of course, for this blog. 🙂 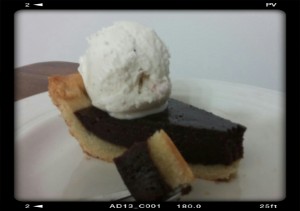 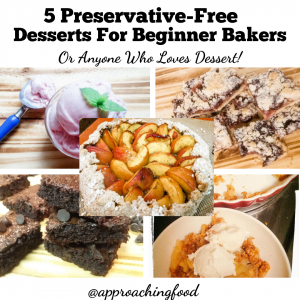 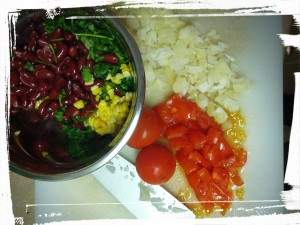