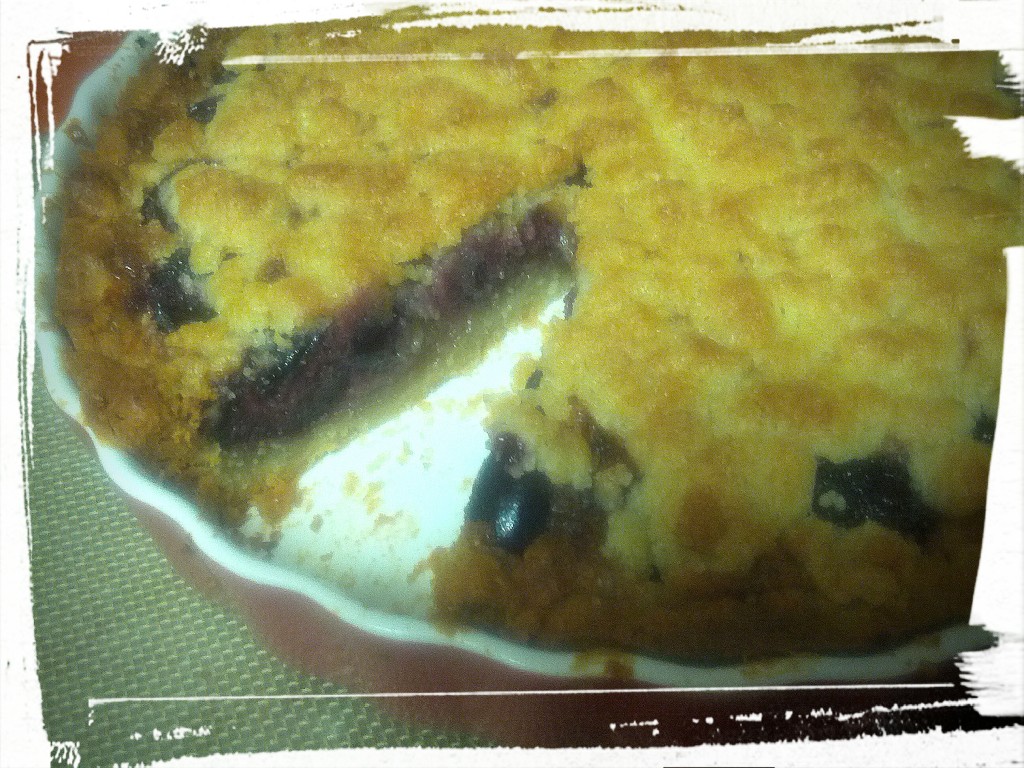 I waited until it cooled just enough not to scald my tongue. Then, feasting time!

This week’s Baking Chez Moi bake-a-long recipe is for Cherry Crumb Tart. In classic Dorie Greenspan style, she starts off the recipe by describing how she came up with the idea to make a tart with cherries after a drive through Alsace, France. As for me, my strongest association with cherries in baked form is that old folksong, which will now be your new earworm: Can she make a cherry pie, Billy Boy, Billy Boy?

The entire time I was making this tart, I was humming the song to myself, albeit with some mondegreens.

Eh. Close enough. And speaking of close enough, this recipe calls for a lot of butter (yum!) and since I don’t have a scale, I sort of eyeballed it when the recipe called for 6 tbsp. here and 6 tbsp. there. So my final product may be a bit buttery, but again…eh, close enough. *grin* 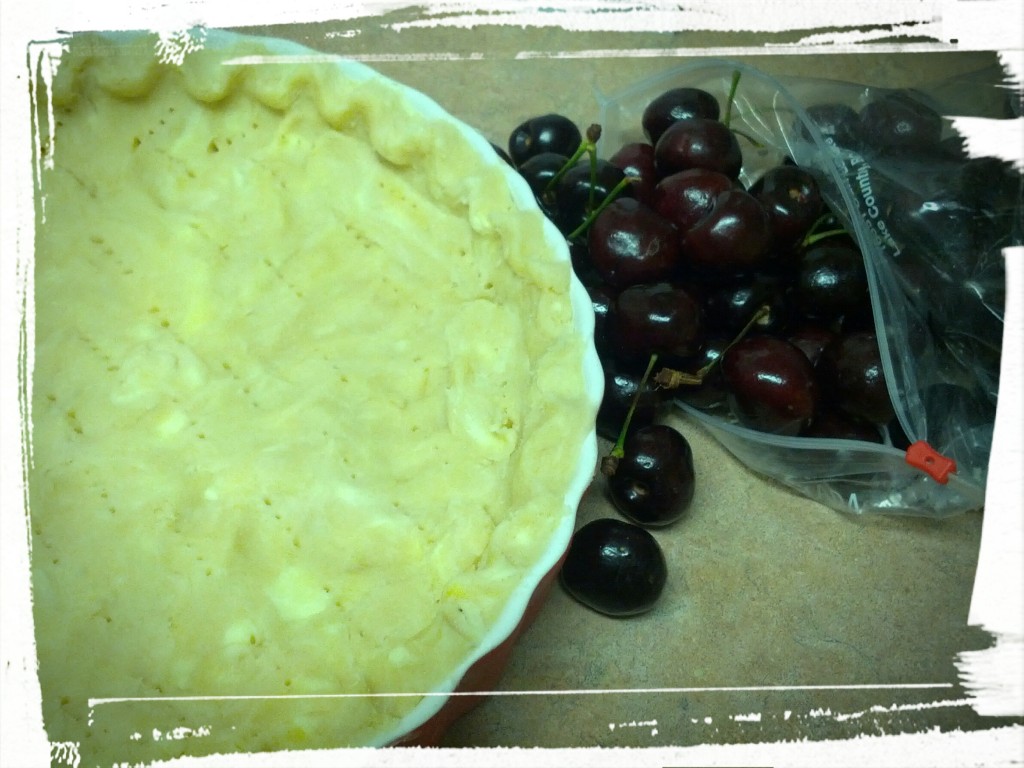 Tart crust plus cherries — it’s a gonna be goot!

So. The recipe! You start with a sweet tart dough base, partially baked, and fill it with an almond cream. Dorie suggests using kirsch to really bring out that cherry flavour, or otherwise sticking with vanilla extract. Me being me, I didn’t have kirsch in the house, but I did have some leftover red wine, so I used a capful of that, plus a scant tsp. of vanilla extract. The (raw and eggy) filling was delicious with that hint of red wine!

On top of the almond cream-filled tart, you place a layer of fresh cherries. Dorie suggests using a chopstick to pit the cherries if one doesn’t have a cherry pitter. The idea is to keep the cherries whole, so one just pokes the chopstick into the cherry to push the pit out. Can I just say that this is a) a brilliant idea, and b) my poor bamboo chopstick will never be the same again. 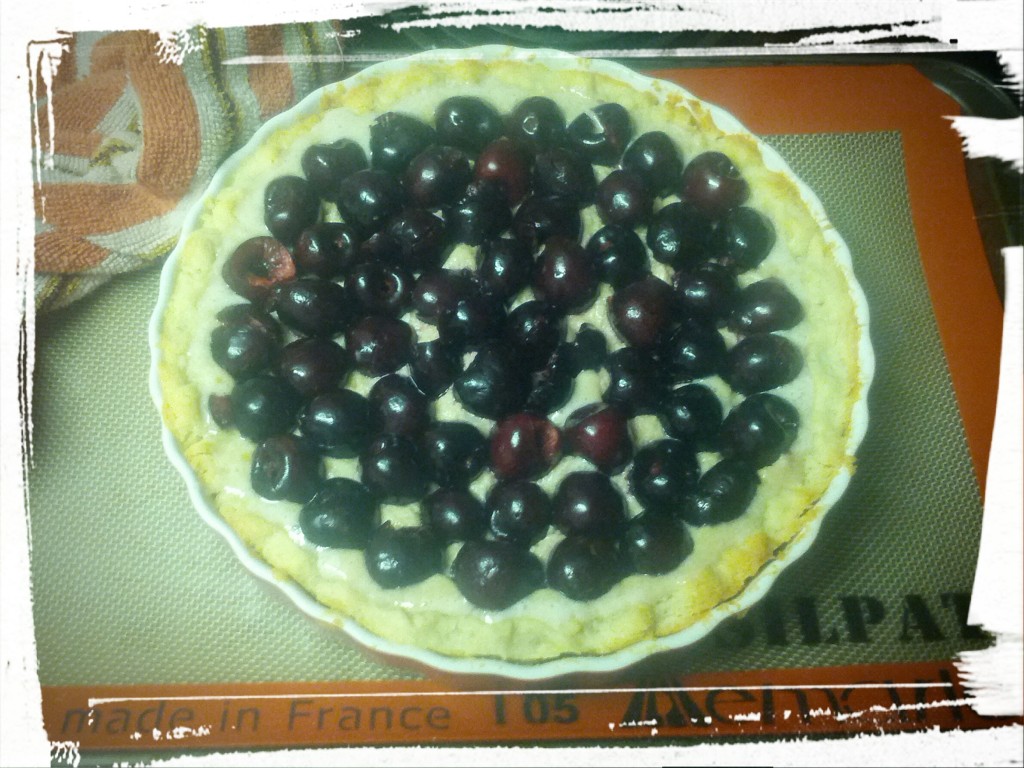 Ringed round with cherries!

Fresh cherries? Have a LOT of juice. And by a lot, I mean my chopstick is stained a lovely plum colour, as are my fingernails. In fact, both of my hands are sporting a pinkish hue. I mopped up cherry juice splatters from the kitchen island, the sink counter, the tile behind the sink (I was facing the opposite direction, incidentally), the floor, and there were even spatters on my sock-clad feet. At one point, the DH came out of his man cave and exclaimed over the mess I’d made of the kitchen. I chased him out of my working space by threatening to hug him with my cherry-juice stained self and he promptly bolted. Ah, the joys of domesticity! 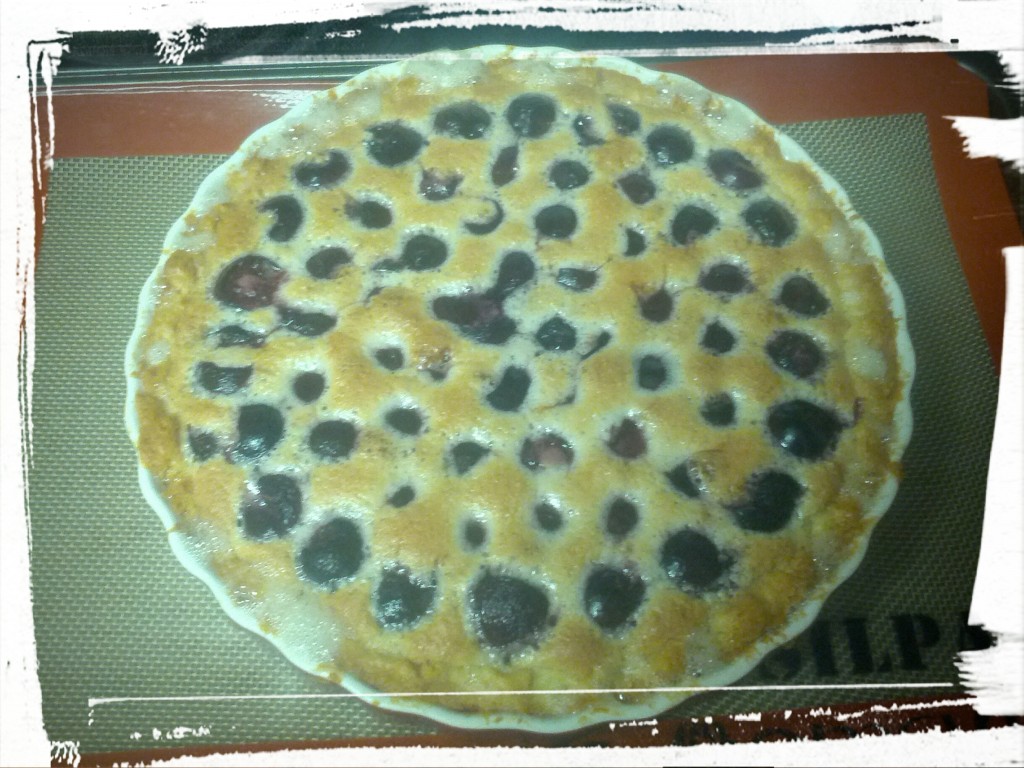 Too much butter. Or, just enough?

Once the cherries were placed on the almond cream-filled tart, it was popped into the oven and baked for a good 45 minutes. Then you pull it back out and put on the final layer: the streusel! Back into the oven it goes for another half hour, until the top is golden brown and the cherries are merrily bubbling away in their juices (or in my case, butter. See above).

Then it’s time to feast!

Verdict: Cherry Crumb Tart — worth the cherry juice stains! Am going to grab another sliver and go curl up on the couch with a book and some pillows. A good book, a cherry tart, what more could I ask for? Life is good. : )

Next Post: My homemade Oreos! Assuming I can find the pieces of paper that I scrawled my cooking notes on. Otherwise maybe my Twisted Spinach and Feta Pie. (I know, I have a thing for pies.) 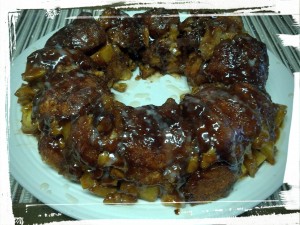 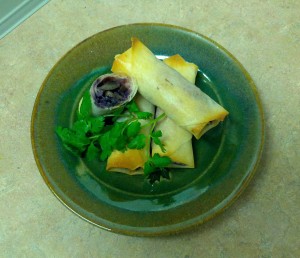 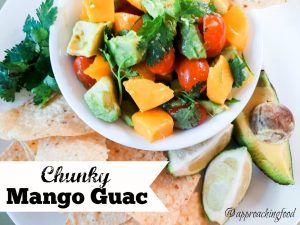