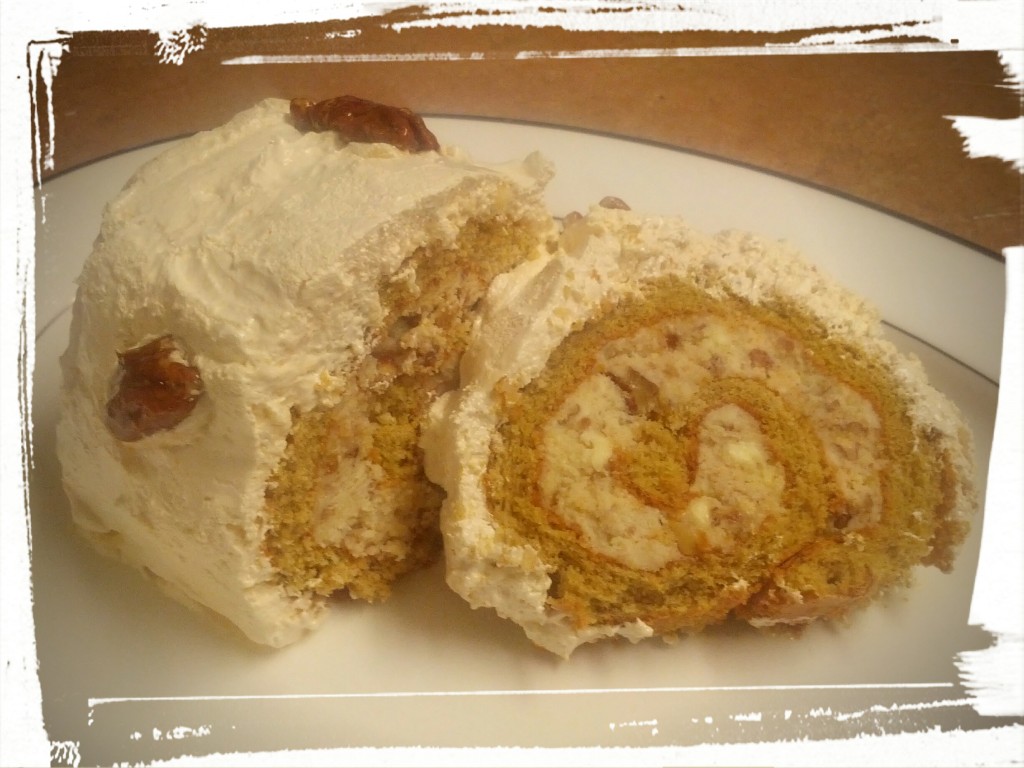 So yummy! Ah, the creamy frosting, the fluffy cake, the tangy filling, the crunchy praline! No, really, I want more.

IN WHICH I BAKE

So I made the Gingerbread Buche de Noel from Dorie Greenspan’s cookbook, Baking Chez Moi: Recipes from My Paris Home to Yours Anywhere. It’s the latest recipe that my bake-a-long group is trying; you can see my other attempts here, here, and here. And more to come!

IN WHICH I ACHE

Can I just tell you? This cake took me half a day to make from start to finish. O.m.g. I’m tired now, and especially my arms are sore. Why are my arms sore? Because this is a Genoise-style cake, meaning that it rises due to air in the batter, as opposed to a rising agent. (Remember I talked about rising agents in my Fruitcake Smackdown?) So I had to beat the batter for a loooong time, to get all that air in. And since I only have a stand mixer and you needed both a stand mixer AND hand mixer, sore biceps and triceps were the result. On the right side, hey, I got a workout in my kitchen! I doubt I burned off all the calories in a single slice of that cake though, as it’s rich! 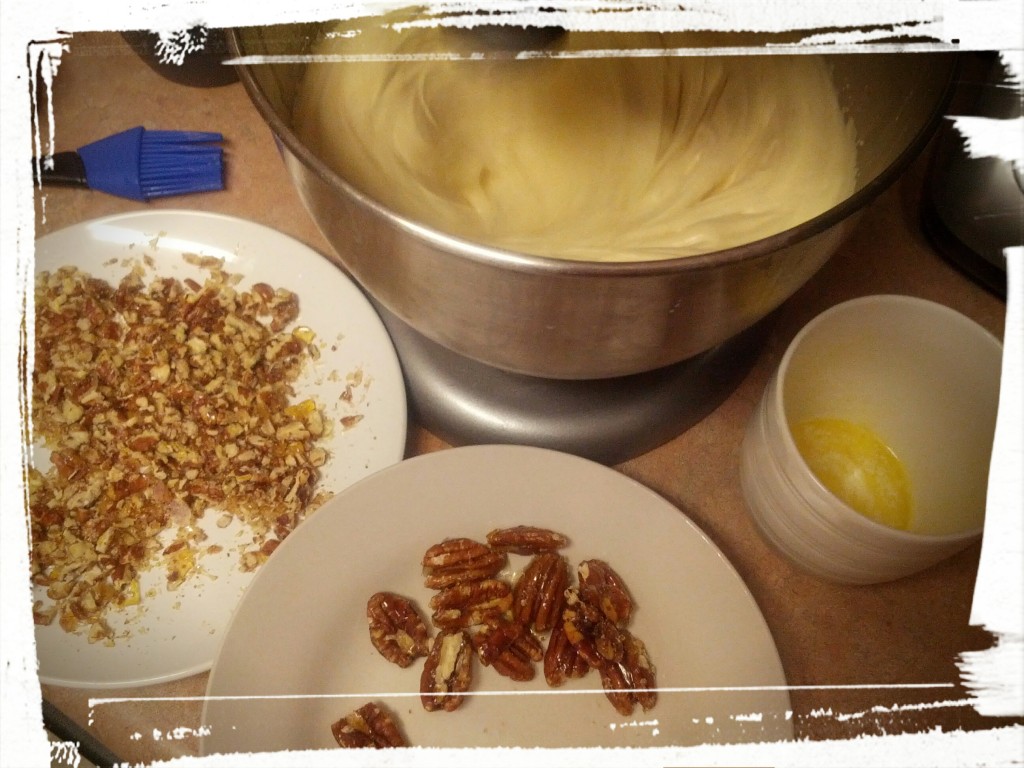 It’s a Yule Log cake, basically, with the cake part a gingerbread flavour. And then the filling is a very rich cream-cheese one, laced with pralines, and the whole thing is iced with a marshmallow frosting, and topped with more pralines. Quite delicious actually, and not too sweet. It just takes an eon to make!

If you want to make your own, here’s the recipe, along with a video. I halved the amounts and everything turned out perfectly. I can’t imagine how big the cake must be if the original quantities are used, but I guess it would be good for a family gathering or so. 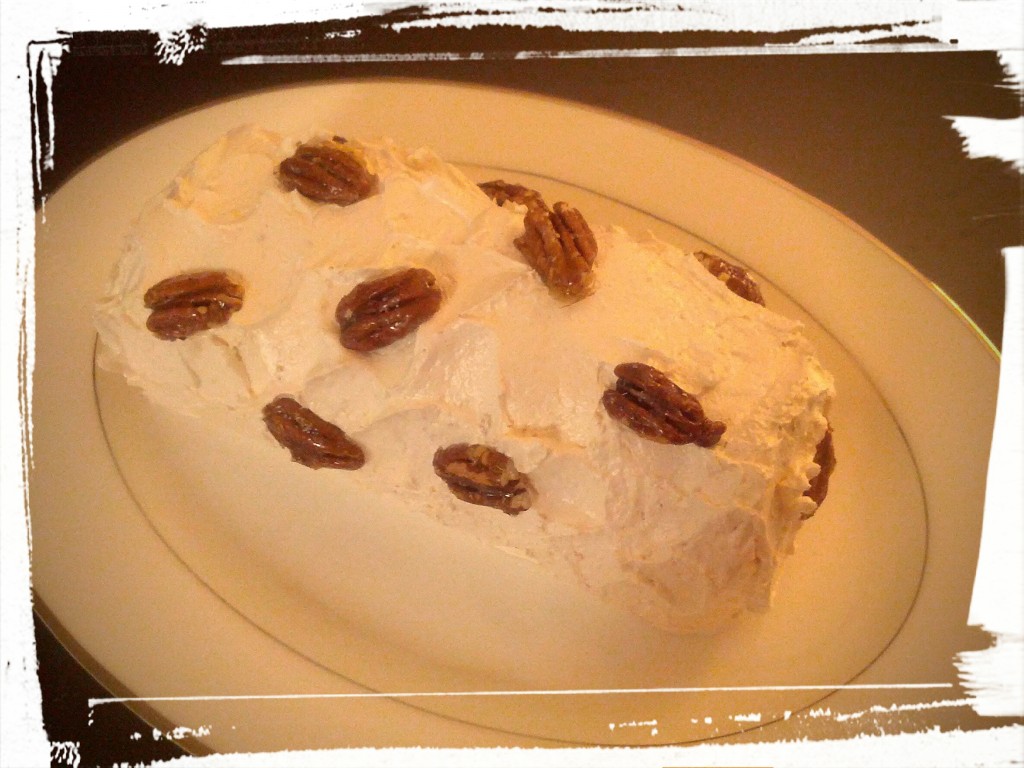 Finally done, and I have to say it looks pretty awesome.

IN WHICH I ATE

I served the Gingerbread Buche de Noel at a small dinner party that I hosted, and it was a hit! The verdict was that it was not too sweet, despite the marshmallow frosting. The crunch of the pralines was the perfect accompaniment to the pillowy icing and the spongy cake. The contrast of the tangy filling was nice too. If I made the recipe again (not anytime soon!), I would probably add a half cup of icing sugar to the filling, just to make it a little bit sweeter, but aside from that, it actually was pretty good as is. Ooh, I should say, when I made the icing, I left the sugar on the burner a tad too long, so there was a bit of a caramel flavour to frosting, but I think it actually enhanced the dessert. Mistakes — I make them, I eat them! 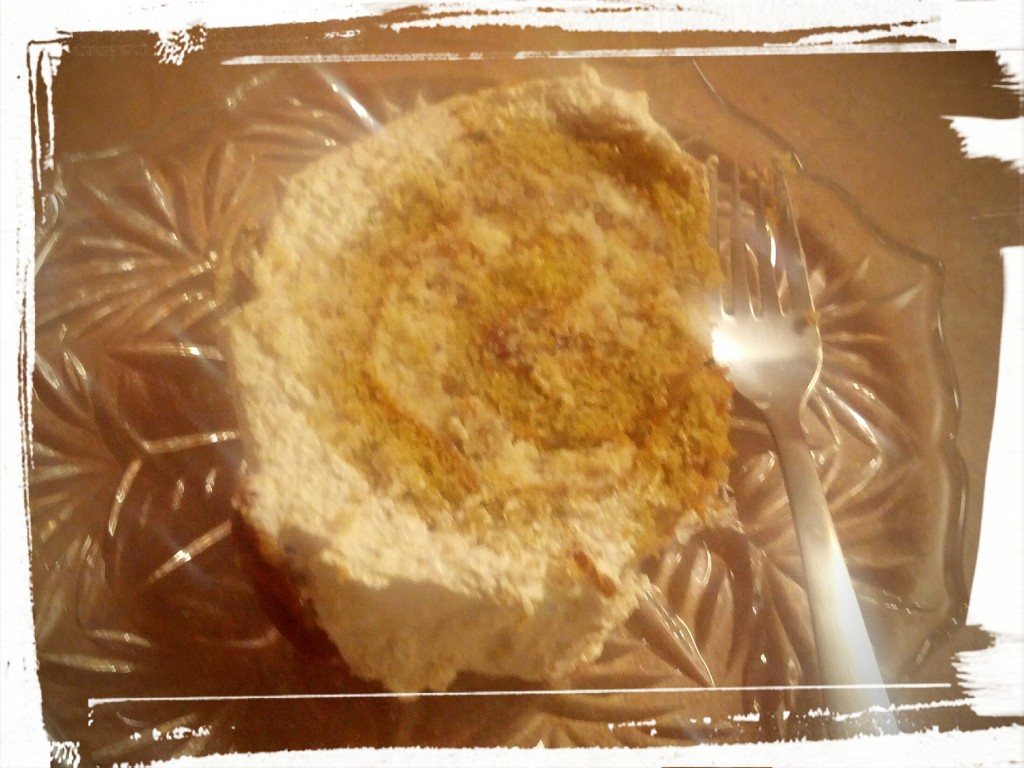 AND ATE SOME MORE

The cake is now gone. I know! I only started slicing the cake yesterday, but because I halved the recipe, it came out to a log of 6 slices. Perfect! Half for the dinner party, and half for me. Yes, half for me! Breakfast, lunch, and dinner today. Deeeelicious!

Next Post: Pan-fried Asparagus and Baby Tomatoes in Clarified Butter. Because yum. And then I’ll switch to salad. Lots of salad. 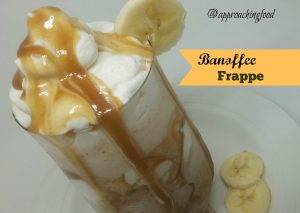 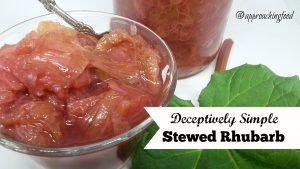 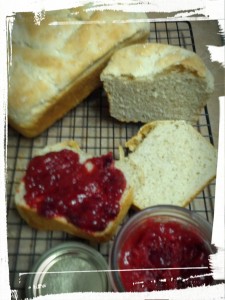