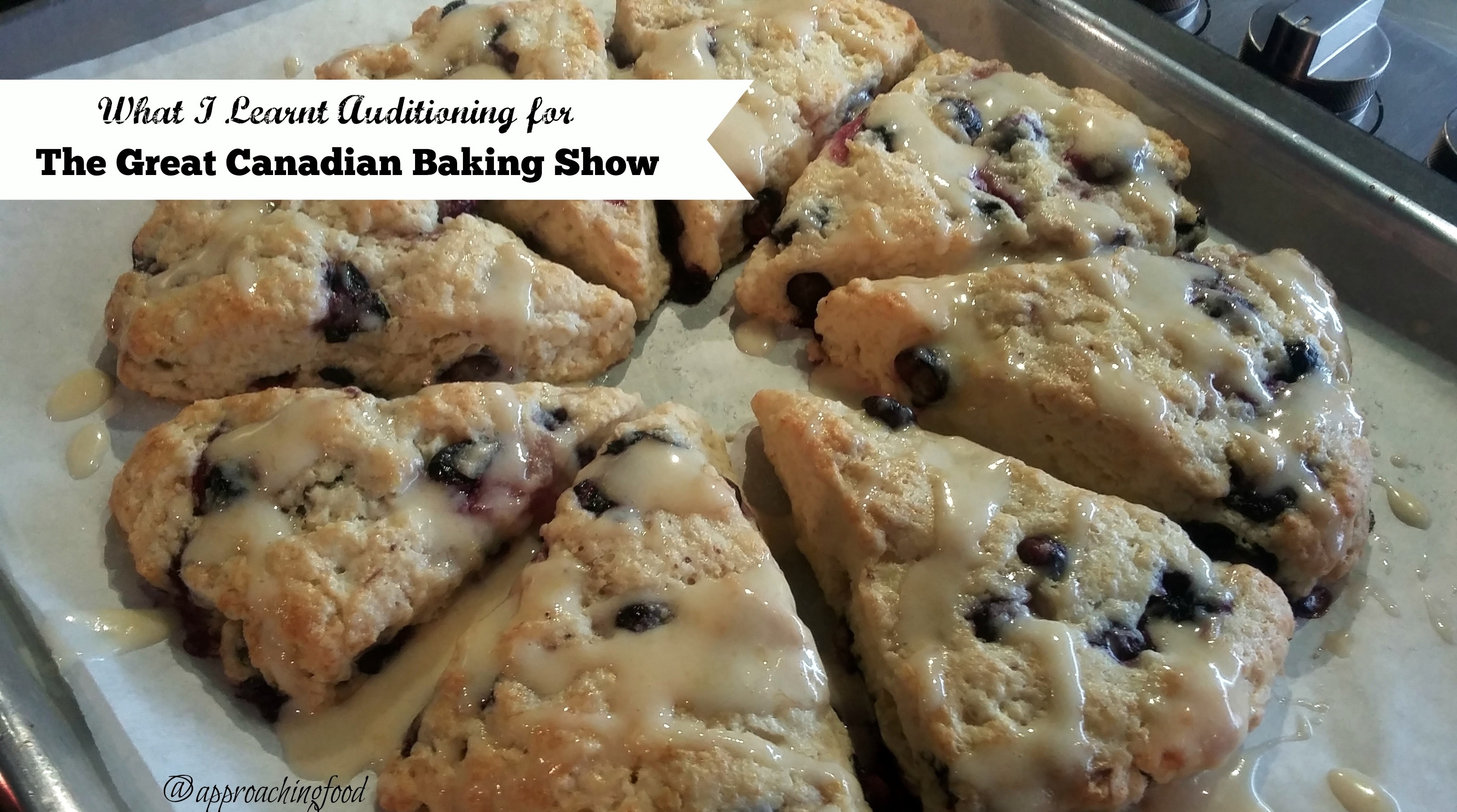 Blueberry and Lemon Scones, baked in front of the judges, in a test kitchen.

What with my insomnia and all, I’m often up baking at midnight. One evening as I was waiting for some muffins to come out of the oven, I scrolled down my facebook feed and saw a sponsored post mentioning that the Great Canadian Baking Show was looking for people to apply to be on the show.

I figured, why not? I filled in the online application, hit the send button, and didn’t give it a second thought.

THAT MAGICAL FEELING…AND HOW I GOT THE AUDITION

I’m not one for superstition, but sometimes serendipity feels like it’s congealing into fate. Why do I say this? Well!

I had my family over for dinner maybe a month ago, and my sister mentioned that she had a colleague who had sent in the application for the show. I mentioned offhandedly that I had also applied. My sister was surprised I had never told her (“What? You applied? You didn’t tell me!!!”) but I honestly felt that the chances of ever hearing back after sending in that online application were close to nil. Two days later, I heard from the producers. (They liked my application!) I also passed the phone interview and bingo-bango, I was invited to audition in person! (Invite-only! I felt special.) 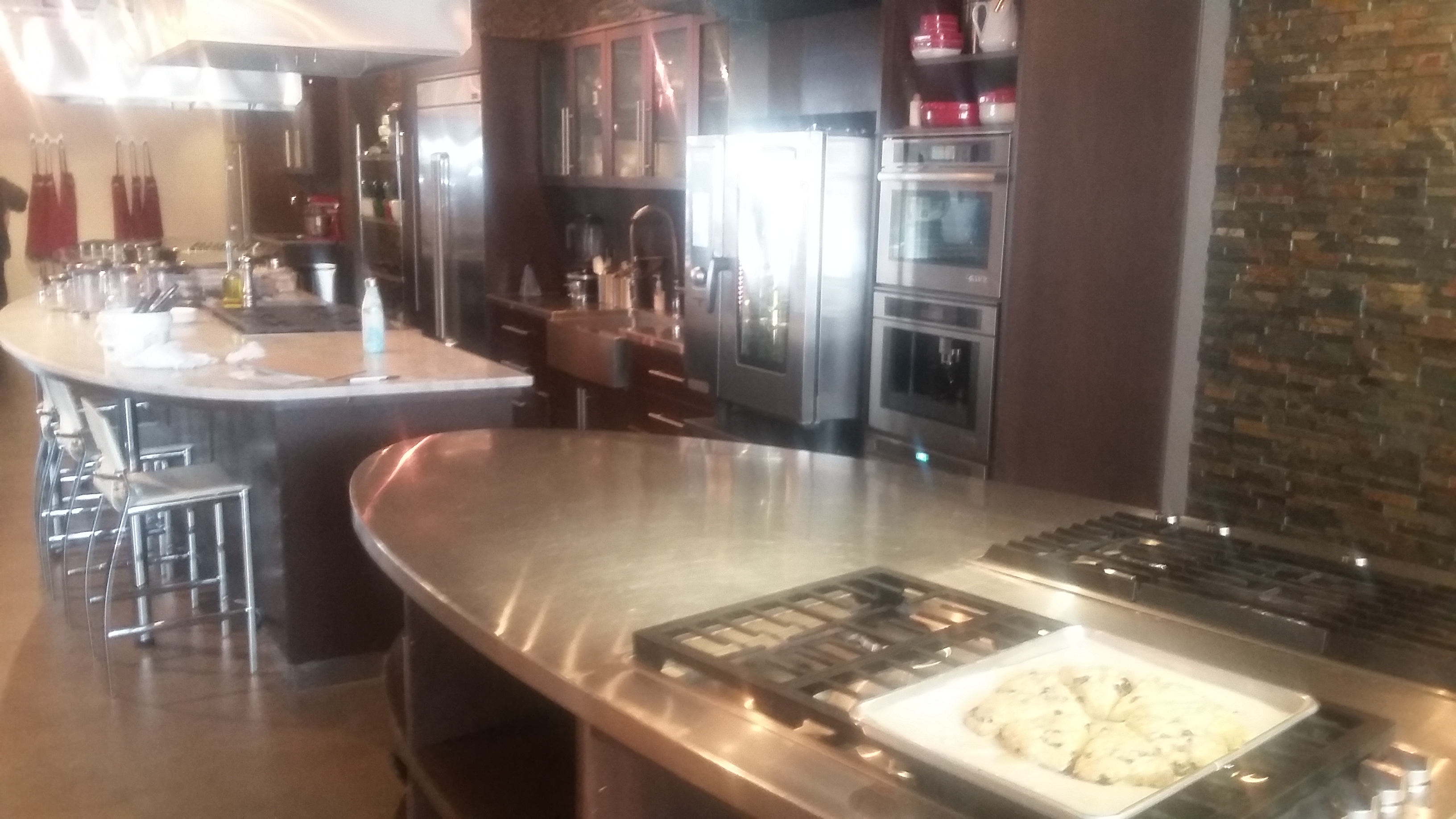 Nice work(place) if you can get it!

We were to bring our signature dish to the audition. I baked chocolate-cherry brownies, topped with a whipped ganache. The cherries (dried sour Montmorency cherries) were soaked in wine first, for an extra oomph. The ganache was spread ever so prettily with an off-set spatula and looked so smooth and glossy. I brought samples to my workplace and everyone swooned.

Once at the auditions, I found out that the recipe that we would be baking in front of the judges was…scones! I had JUST made blueberry and lemon scones two days prior, so the technique was still fresh in my head. (Don’t overwork the dough! Dust the blueberries with flour before adding to batter! Fluff the flour with a fork before measuring it! Bake scones close together for soft sides and far apart for crunchy sides!) 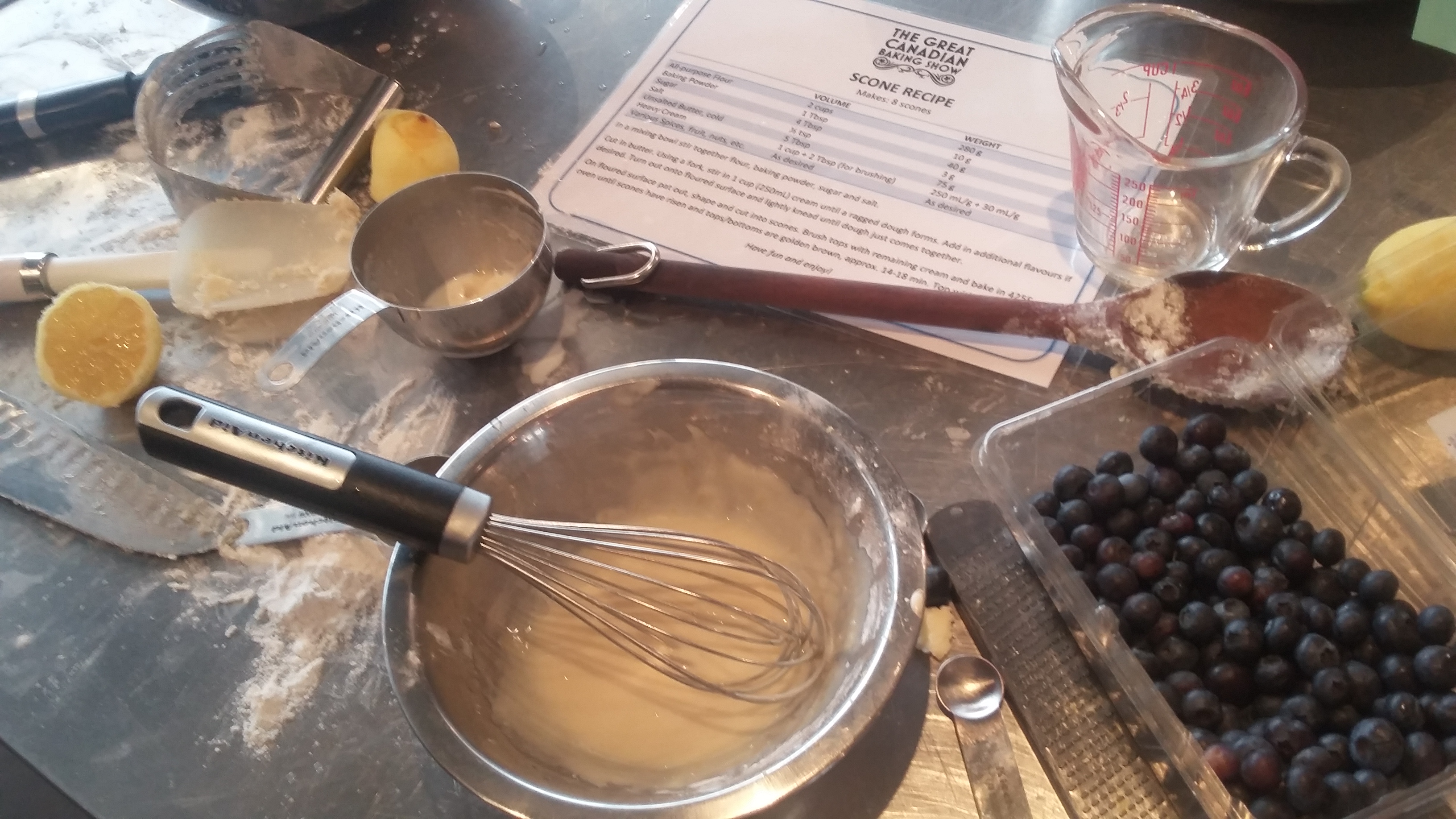 As I told a judge, I cook with enthusiasm!

I felt a bit like outside forces were conspiring to help me out. Everything was just falling into place so easily!

Why? Because I don’t feel my brownies, however scrumptious and tasty and perfectly chewy and flavourful and smooth (I could go on) held up well compared to the showiness of some of the other desserts (BIG desserts! SHOWY desserts!)

As well, my scones just did not reflect my baking ability. *shakes fist at malfunctioning convection oven*

Plus, the on-camera interviewer didn’t ask me the same questions that she asked everyone else! I had some great stories and anecdotes to share based on what they asked EVERYONE else, and then they asked me some bland questions.

So I felt my brownies were blah, my scones were bleh, and then my answers were bland. Blah, bleh, and bland do not equal #GreatCanadianBakingShow or #CBC primetime.

But! Towards the end of the audition, all the attendees got together and shared their baking. We all tasted each other’s treats and packed some to go home with. My brownies? Gone. They got eaten! The staff of the show and my fellow attendees apparently couldn’t resist a good, solid chocolate brownie. Balm for my wilted ego. 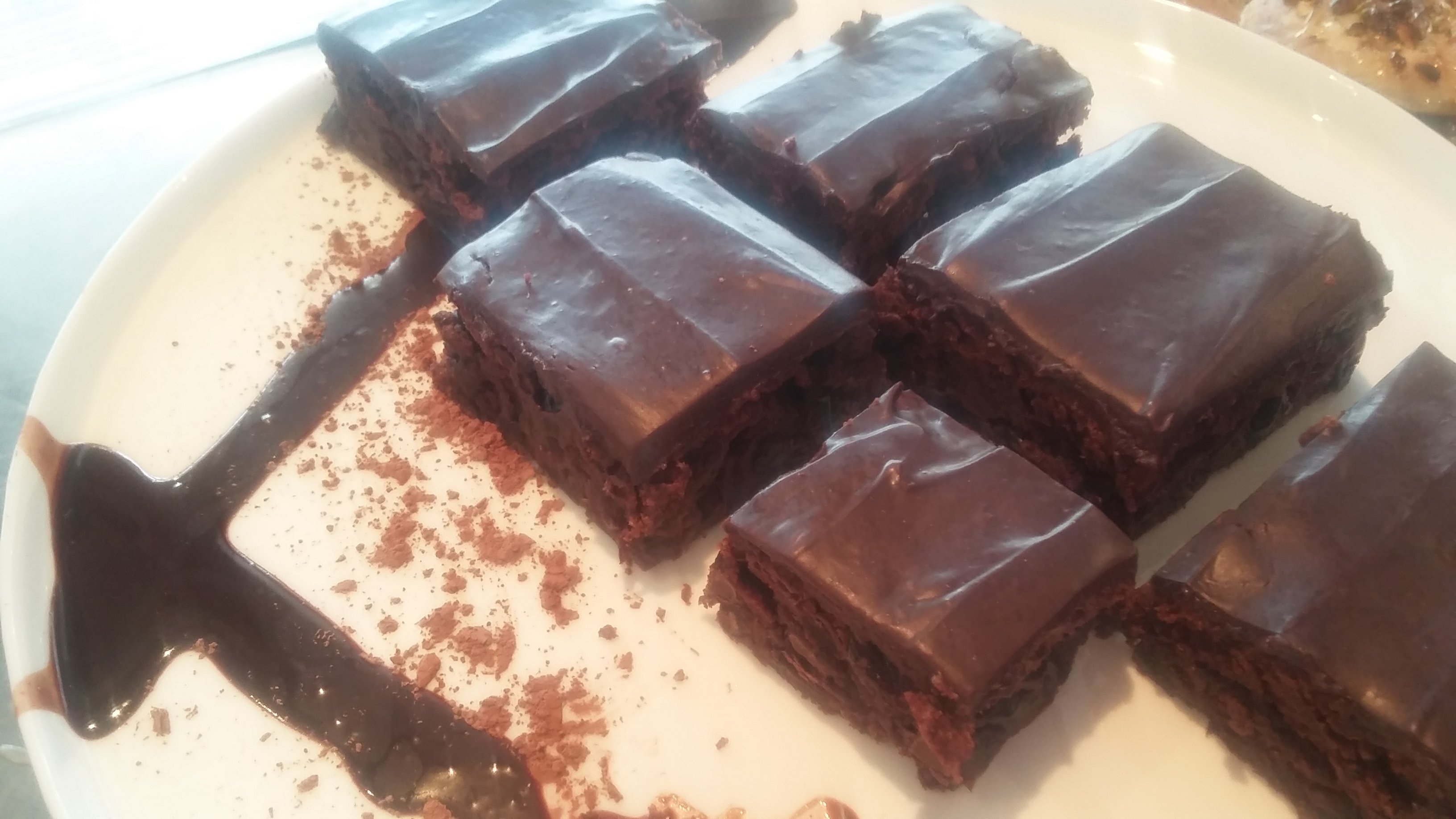 Awkward photo of my baking submission, awkwardly plated at the last minute.

THINGS I LEARNT WHILE EATING CAKE. AND DONUTS. AND SCONES. AND CUPCAKES. AND COOKIES.

Publicity starts with generating buzz. While we had to sign waivers and confidentiality forms, we were also encouraged to take photos with signage and to post/tweet/whatever with “hashtag Great Canadian Baking Show” and “hashtag CBC”. If all the audition attendees, their family, friends, and social media connections, watch the show, well, you’ve just cultivated yourself a pretty large audience, and that’s without doing any actual paid advertising.

The majority of the show applicants are white, thirty-something females. And mostly quite slender (How? Do they not eat their baking?). <– I asked several people this, and it turns out a number of them run triathalons or do ironman races. I’ll just be over here in the corner eating my scones, thank you very much.

An outsize personality will probably get you places, even in sedate, uber-nice Canada. I fully expect the show participants to have some colour to their personality. Me, while I can be both an extrovert and an introvert (that’s a Gemini for you!), I felt I presented as an introvert, and I don’t think that was in my favour.

Speaking of uber-nice, Canadians really are nice! At one point I was perched on a counter in the test kitchen as I was waiting for everyone else to finish up (I finished my scones early! Yay, me!) and I guess I looked a bit discouraged, because several people tried to cheer me up. The judges: “I love cherries. And chocolate!” and “Don’t worry, we know the ovens aren’t working properly. The last group burnt their scones.” Even my fellow audition attendees were super nice: “Here, let me share the cream for the glaze.” and “Oh, you’re not done with the oven? I’ll wait, you take your time.” and “Good luck! I told everyone that your brownies had a special ingredient!” <– Not sure if this was actually helpful. But I know she meant well!

Fancy-pants showstopper pieces are the way to go. I was going for flavour, ingredients, and technique, but if I had to do it again, I’d go for something big, like a croquembouche tower crossed with a everything-but-the-kitchen-sink cake, dusted with edible gold and multiple pronged pieces of homemade spun sugar. Think big, think fancy, or go for really simple (but UNIQUE!) and do that EXPERTLY!

Technique is all well and good, but looks will get you everywhere. My scones tasted fabulous. They were light and fluffy, studded with juicy blueberries, and the flavour of the fresh lemon zest came through both in the scone and in the drizzle on top. However, they looked like a wet flop. Because…

Messed up ovens will mess you up. I’ve never used a convection oven before and of all the times to start, it had to be at my baking audition. And then that oven didn’t work! I mean, how can a 425 degree oven not bake scones fully when they’re in almost double the time the recipe called for? Felt more like a 325 degree oven.

“We just have a few more questions for X,Y, and Z” is code for “You made the cut.” I don’t know for sure that this is the case, but I’m pretty sure! Interestingly, there was a lot of overlap between X, Y, and Z, and who I personally think will make it to the next level. Needless to say, I was not X, Y, or Z. 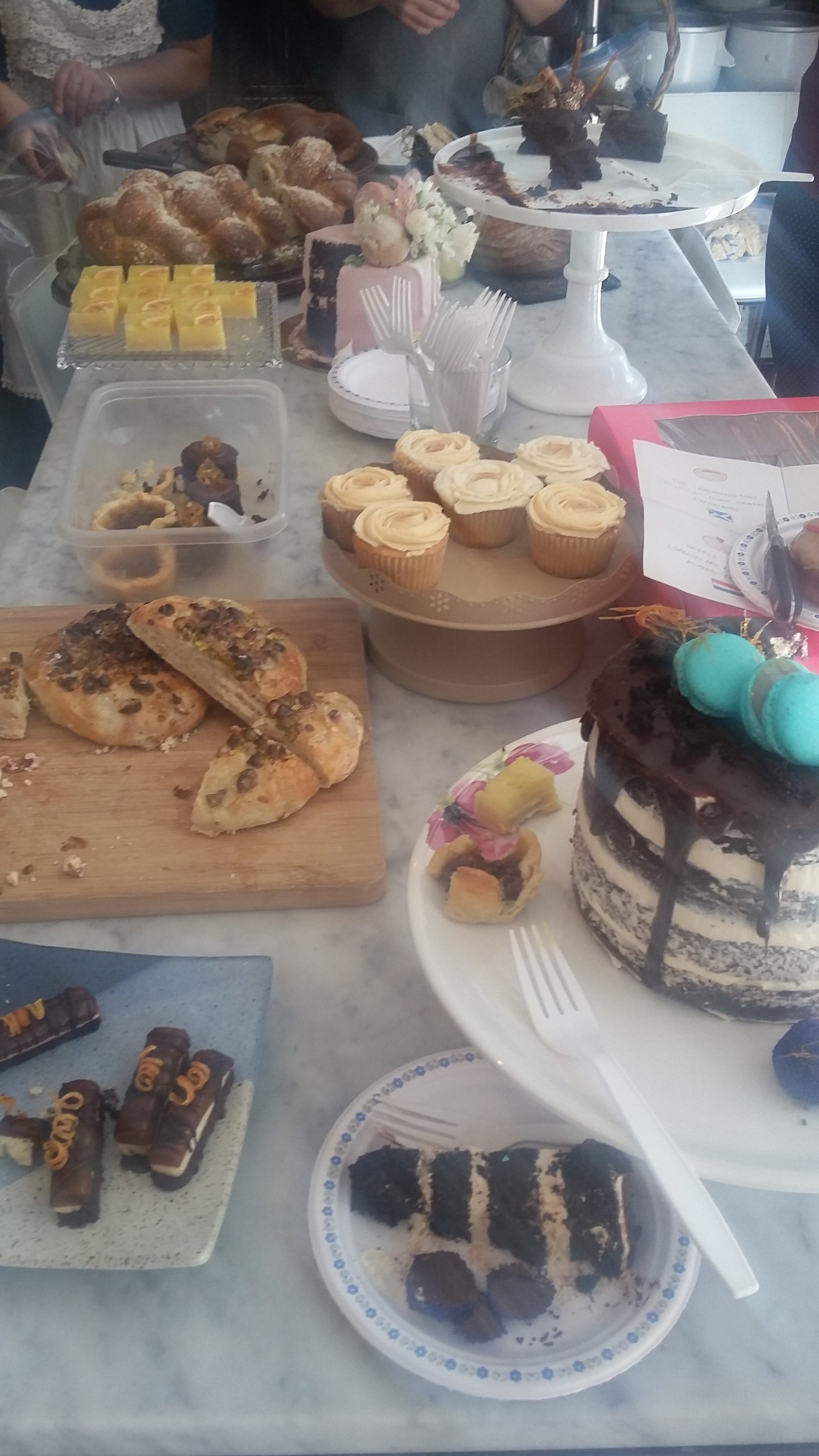 Some of the baked goods, before the attendees fell on them like a plague of locusts. #LocustNumberOneRightHere

WHO DO I THINK WILL WIN?

There were four people in my audition that I think have the potential to make it to the next round (or show!). Someone who made absolutely perfect whole wheat bread, semi-rustic style but with a fancy razor-slashed design and dusted with flour; someone who had the perfect personality to show up on TV (loud, fun, and laughs a lot); and someone who made a fancy-pants cake topped with macarons and fresh flowers (and even dusted the flowers with edible gold). An honourable mention for my nominations is someone who made chocolate-dipped shortbread. These were perfect little sticks of shortbread, dipped in dark chocolate on the bottom, dipped in caramel on the top, drizzled with more chocolate, and then topped with the perfect little twirl of candied orange peel. Just perfect technique.

My overall takeaway? If you’re auditioning, you do you, boo, and don’t take the audition to heart that much. The auditions are just a snapshot of a certain moment in time for your baking, and if you’re having a bad day (or a bad oven!), it’s game over, even if you actually know what you’re doing. Enjoy the experience. And anyway…there’s always season two!

Next Post: Pea Soup, with or without Ham. And what to do with Too Many Scones. All the scones. My freezer is really, really full of scones. Did I mention the scones? 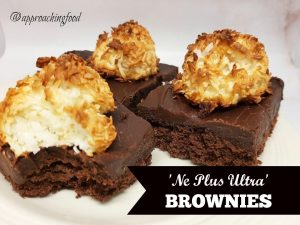 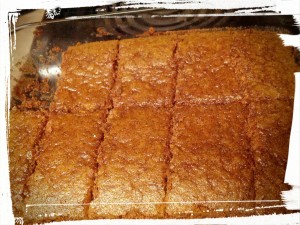 Previous Post: « Purely Pear Sauce and The Joys of Eating In Bed
Next Post: Hearty Pea Soup with Ham & Why My Shoes are Squelching »